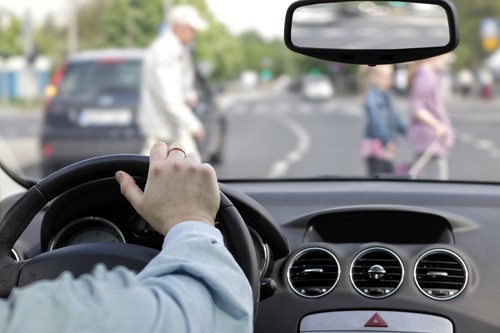 Dangerous by Design? Why Streets Must Increase Safety at Crosswalks

The National Complete Streets Coalition promotes the development and implementation of Complete Streets policies and professional practices. Those policies are focused on designing streets that enable safe access for all users, including pedestrians, bicyclists, motorists, and transit riders of all ages and abilities. According to the coalition, when a community has “complete streets,” it makes it easy to “cross the street, walk to shops, and bicycle to work. They allow buses to run on time and make it safe for people to walk to and from train stations.”

To date, over 1,140 agencies at the local, regional, and state levels have adopted Complete Streets policies, totaling over 1,200 policies nationwide. That’s impressive—and necessary, as it turns out.

Look at these statistics provided by Complete Streets:

“Between 2005 and 2014, a total of 46,149 people were struck and killed by cars while walking in the United States. In 2014, the most recent year for which data are available, 4,884 people were killed by a car while walking—105 people more than in 2013. On average, 13 people were struck and killed by a car while walking every day in 2014. And between 2005 and 2014, Americans were 7.2 times more likely to die as a pedestrian than from a natural disaster. Each one of those people was a child, parent, friend, classmate, or neighbor. And these tragedies are occurring across the country—in small towns and big cities, in communities on the coast and in the heartland.”

At the heart of the problem is that conventional engineering designs streets to facilitate car movement (not people) and to do so as efficiently and quickly as possible. Complete Streets asserts that this implementation “creates an environment that is fundamentally ‘dangerous by design’ for all people who use the road, especially pedestrians, bicyclists, older adults, and people living with disabilities.” In Complete Street studies that have documented such collisions, the way we design streets is a factor in the fatal collisions.

Metropolitan areas, with burgeoning and active communities, feel the impact the most. Queens Plaza and Dutch Kills neighborhoods in New York City are concerned about the “growing epidemic” of pedestrian fatalities, and are pushing for comprehensive studies to eradicate the problems. Nearby Long Island City is conducting a $6 million study of the traffic patterns there. Through a safety plan proposed by the Queens Department of Transportation (DOT), another area in NYC is exploring implementing a major redesign for a car-free plaza. Pedestrian plazas are popping up in many metropolitan and suburban areas to provide safe transportation options for pedestrians—and cyclists.

Denver, Colorado made some much-needed improvements to decrease auto-pedestrian crashes and redesigned a number of crosswalks in high-traffic areas. Citing an article from ABC affiliate Denver 7, CDOT spokeswoman Mindy Crane said the new friction-grip crosswalks also last longer than the traditional white striping [thermoplastic or preform] found at most crosswalks. “The material is more for durability,” she said. “We want that to stand out, to last longer. The color also draws more attention to the crosswalk.” They definitely catch the attention of pedestrians and drivers. In the three years after the crosswalks were put in, the accident rate went from an average of two pedestrian/auto accidents a year, to only one (total) in three years.

As the name suggests, Color-Safe employs the use of bright, highly visible colors—which can be custom-created to make unique, vibrant designs, specialty markings, or logos—to increase appeal while improving safety. It is used extensively for:

This durable pavement marking material fits into Transpo’s portfolio of state-of-the-art safety products with its wide-spread use on any high-traffic areas where safety, visibility, durability, and longevity is vital. Download our portfolio to see some of the vibrant, custom-designed Color-Safe installations around the country!

More in this category: « Why Choose Color-Safe® MMA over Thermoplastic? Bicycle Safety: Tips to Reduce Your Risk on the Road »
back to top